​The national association had its beginnings in Canberra on 15 October 1951 when 16 local government women drawn from all States of Australia attended the Jubilee Women's Convention in the Jubilee Year of the Commonwealth of Australia. Among the first Vice-presidents was Councillor Ethel E. Wache, Noarlunga Council, South Australia.

The Association now has all Australian states and the Northern Territory as member Branches federated through a common National Constitution with a National Board. The National Board is a collaborative body comprised of membership from each of the state branches, and seeks to strengthen networking, mentoring and innovative opportunities that encourage and support women in local government. It holds a Biennial Annual General meeting and conference. which has been held every year since 1966.
​
More History information at: www.algwa.net.au/about/

ALGWA SA Branch Inc was formed in 1964 when there were only nine women elected to councils throughout South Australia.The Branch lapsed and was re-formed as an incorporated association in October 2005 with a Commonwealth Government’s Women’s Leadership and Development grant through national ALGWA.

​ALGWA SA founding members included Ellinor Gertrude Walker O.B.E as first President.
She  was awarded an O.B.E. in 1971 and died in 1990 aged 97.
Ellinor wrote the draft of the The Guardianship of Infants Act 1941 which gave mothers equal rights with fathers in relation to children for the first time in South Australia.

Elizabeth Furner began taking an interest in both writing and local government, stimulated by her disgust about the discriminatory franchise laws.

​Elizabeth joined the Australian Local Government Women's Association, rising quickly to President of the South Australian Branch, and did much public speaking as well as standing for council in North Brighton. http://www.womenaustralia.info/biogs/AWE0690b.htm 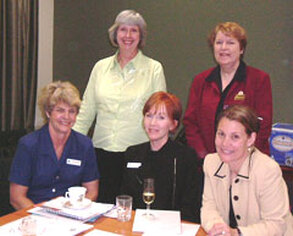 The following people were elected to formerly start a branch in South Australia: